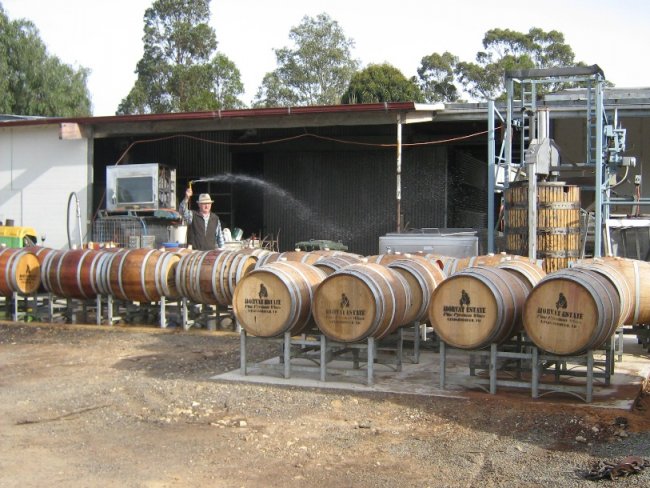 Although the Victorian Pyrenees was, prior to the Great Depression, a premium wine producing area, the wool boom of the 1940’s suppressed the wine industry, and the area became known for sheep farming.

In 1980,  local business-man Andrija Horvat and his family moved to the small country town of Landsborough.  He had plans to continue his Croatian family heritage and plant a vineyard on the Western foot of the Pyrenees Ranges, but was advised by local sheep farmers that the area was unsuitable for growing premium grapes.

His original view was confirmed in 1994 when Southcorp planted 400 acres of Shiraz in the same area, which encouraged him to pursue his original vision of a super premium vineyard on his property.   The Horvat family planted 3 hectares of Shiraz cuttings which were sourced from Best’s Great Western, and in coming years, Cabernet Sauvignon was added.  The Landsborough vineyard site had gravelly quartz loam soils with a dry, cooler climate – very good conditions to grow premium quality wine grapes.

The concept of Horvat Estate Wines was conceived with their first commercial vintage, the ‘2000 Shiraz’ of which only 5 tonnes were crushed, thus re-kindling the lifelong love affair of winemaking that for years had been dormant.

The 2000 Shiraz won a Bronze medal, which added their enthusiasm to push on with expansion, and in 2003 (after another Bronze medal for the 2002 Shiraz), 50 tonnes were crushed with Cabernet Sauvignon, Chardonnay, and a fortified Dessert Wine added to their range.

In 2005 a new series, the  “Premium Family Reserve” was launched to commemorate the original 3 hectare Shiraz vineyard, the image of which now appears on the Horvat Estate labels.

The first release of the Premium Family Reserve Shiraz, from the 2003 vintage won a silver medal from the prestigious Ballarat Wine Show.

Also celebrating success since their release in 2005, are the 2004 ‘Grampians’ Shiraz and Chardonnay pair.  Sourced from two selected vineyards from the neighboring Grampians region, the young, zesty wines have been received well.

To assist the necessary expansion and the particular needs of the winemaking team, the winery is now equipped with custom made equipment designed to utilise traditional hand-made methods on a larger scale, resulting in individual wines with true character and finesse.